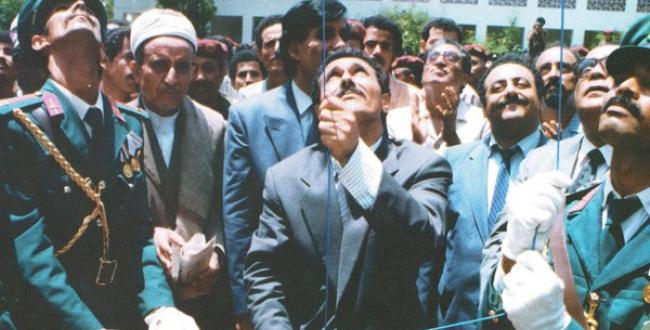 Yemeni President Ali Abdullah Saleh raises the flag on May 22, 1990 to mark the unification of the North and South (Source: Wikimedia Commons)

The Middle East Institute’s Oman Library houses a unique collection of Yemeni books and publications, produced by government agencies, research organizations specializing in Yemeni politics and society, and by Yemeni scholars. These works reflect a watershed moment in Yemeni history, a time of accelerated democratic transitioning. Most of the materials in the collection were published between 1990 and 1994, at a time when Yemen underwent substantial social and political reform as a result of Yemeni unification in May 1990, which merged North and South Yemen. The dialogue around the unification process signaled a more politically open Yemen; as Middle East Studies Librarian David Hirsch notes, in the early 1990s, “the country [...]experienced a publishing explosion."1 In 1994, that democratic window closed when Yemen was plunged into civil war, making the glimpses of the vibrant civic engagement leading up to the 1993 elections all the more valuable.

To understand the forces at play in both the election and the war that followed, one must understand the dynamics of pre-unification Yemeni politics. In the library, one can read accounts of politics in the North and South, like ʿAbd Allāh bin Aḥmad Muḥammad Thawr’s Thawrat al-Yaman 1948-1968 (The Yemeni Revolution 1948-1968). Thawr’s book offers an extensive study of the 1962 revolution that toppled the Zaidi Imamate in North Yemen, which had ruled for over a thousand years. In Thawr’s estimation, the 1962 revolution represented the first tangible democratic experience in modern Yemeni history. Over the next thirty years, North Yemen underwent a series of electoral experiments that are traced in Muḥammad Ṭarbūsh’s Taṭawwur al-nuẓm al-intikhabīyah fī al-jumhūrīyah al-yamanīyah: 1948-1992 (The Evolution of Voting Systems in the Republic of Yemen). Ṭarbūsh’s work is a legal account of the constitutional and administrative changes to the Yemeni electoral process, dating back to 1948.

The People’s Democratic Republic of Yemen, which existed in the south between 1967 and 1990, was a Marxist–Leninist one-party state. While elections were held frequently, the Yemeni Socialist Party was the only ruling party and exercised near-total authority over both the legislative and administrative systems. The Unification in 1990 brought about significant changes to the previous electoral systems in both North and South. The most significant change was the establishment of a multiparty representative democracy in Yemen. More than 50 parties participated in the first parliamentary elections held in 1993.2 Reflecting this proliferation of political interest groups, the Oman Library holds a vast number of leaflets, party programs, campaign material, and other ephemera portraying this extraordinary shift in Yemenis’ views, criticisms, and hopes for their newborn democracy.

Ephemera, or material published with immediate short-term purpose, was a vital tool for the dozens of parties vying for attention and votes. Competing parties and candidates often sought to out-publish each other as they advocated for their respective political programs. The works held by the Oman Library exemplify the diversity of models and ideologies present in the 1993 election, comprising texts from groups as varied as the Northern-dominated General People's Congress, the Southern-dominated Yemeni Socialist Party, the Liberal Constitution Party, the Yemeni Organization for the Defense of Rights and Freedoms, and numerous independent candidates. The library’s collection includes campaign literature such as, al-Barnāmij al-intikhābī lil-muʾtamar al-shaʿbī al-ʿām (The Electoral Platform of the General People’s Congress); al-Barnāmij al-siyāsī lil-ḥizb al-ishtirāki al-yamanī (The Political Platform of the Yemeni Socialist Party); and Taṣawwarāt ḥawla tafaʿīl al-muʾtamar al-shaʿbī (Perspectives on the Mobilization of the General People’s Congress). 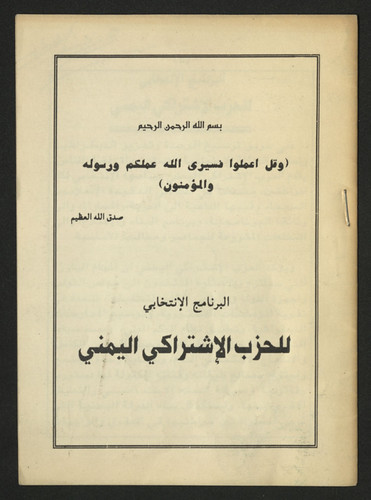 The fact that the Oman Library offers researchers access to these unique ephemeral documents is significant for a number of reasons. First, as materials produced for their short-term impact, ephemera are “documents of everyday life, perhaps even more so than books” and “reflect social and cultural trends.”3 As primary documents meant to be accessible, exciting, easy to carry, and digestible, the aesthetic and material aspects of these works are inseparable from their content.4 Second, because circulation of these materials was often brief, noncommercial, and limited in its geographic scope, materials like those held in this collection are rare in Western libraries. While institutions widely recognize the value of preserving the information contained in books, they are often less inclined to see value in pamphlets and campaign materials. Many of these materials are not held by any other libraries, archives, or museums in North America and are not yet accessible in digital form. The Oman Library, however, has made the decision not to digitize certain materials that could compromise the safety and security of individuals currently living through the contemporary conflict in Yemen; these materials will be browseable as part of the Library’s physical collection.

Traversing a wide array of subjects, these works shine a light on some of the most pressing issues faced by Yemeni society during their time. "As the ongoing Yemen civil war nears its eighth anniversary, there has never been a greater need to understand the history of Yemeni political developments and the decisions that brought Yemen to its current state of crisis," notes Middle East Institute Senior Vice President and Former U.S. Ambassador to Yemen, Gerald M. Feierstein. "The materials that the Oman Library is making available now are a treasure trove that will help researchers not only understand the developments that led to today's conflicts but hopefully will also inform the decisions that will prevent their recurrence in the future."

This collection would be of considerable value to scholars of the contemporary crisis in Yemen, the history of the Arabian Peninsula, and publishing in the Arab world. These works offer crucial insight into one of the region’s under-examined countries, allowing us to read the history of Yemen through the voices of Yemeni authors themselves. 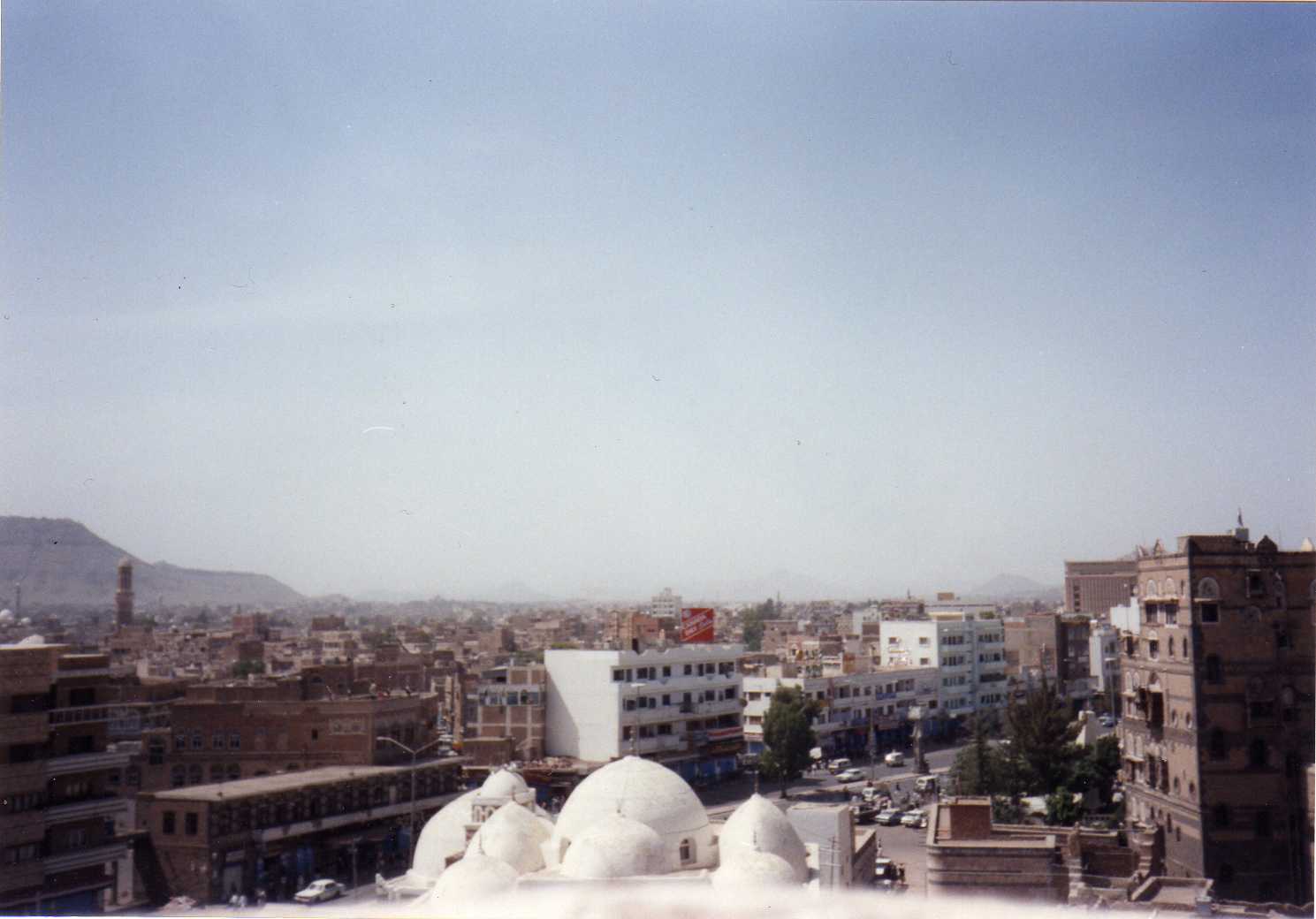 A photo of downtown Sana'a taken in 1992 (Source: Wikimedia Commons).

The majority of these Yemeni publications were donated to the Oman Library by Sheila Carapico, Professor Emerita of Political Science and Global Studies at the University of Richmond, in 2019. The rare books, pamphlets, and issues of short-run journals donated by Carapico served as integral sources for her acclaimed 1998 book Civil Society in Yemen: The Political Economy of Activism in Modern Arabia (Cambridge: Cambridge University Press, 1998), also held by the Oman Library.

Having spent many years studying civic culture and political participation in Yemen, Carapico’s book provides a rare on-the-ground analysis of this brief but formative period in the country’s history. Her work focuses on the contributions of civil society organizations to laying the groundwork for unification and a vibrant democratic discourse.5 Carapico’s work pushes back against the arguments of democratic theorists who single out great leaders, exogenous aid, or the benevolence of the political class as key determinants of successful democratic transitions.6 Instead, she offers a twofold explanation of the democratization movement in Yemen. First, she writes that the most crucial force for democratization in Yemen was “civil society [which] generates pressures for constitutionalism, representation, and tolerance.”7 She also argues, however, that civilian engagement in democratic discourse “does not imply their a priori endorsement of liberal Enlightenment ideals; rather civic potential lies in the very breadth and diversity of models and ideologies alive in the body politic.”8 With this argument, Carapico works against Eurocentric models of democratization that frequently evince their own ideological proximity to these liberal Enlightenment ideals.

The ephemera that Carapico collected and that the Oman Library now holds represent the voices of Yemeni citizens engaged in the process of shaping their own democracy. Many of the perspectives on that process that Western audiences have access to come from foreign observers–like the National Democratic Institute which provided provisional on-the-ground assistance during the 1993 election–noting the democratic and anti-democratic, national and international forces at play.9 However, as Carapico highlights, international organizations and funding play a limited role in “set[ing] the parameters of civic space,” and allowing activists to “press for greater tolerance.”10 It is the actions of Yemeni civil society itself, reflected in these documents, that fill and expand the spaces provided for activism and determine the success or failure of humanitarian change.11

Bonnefoy, Laurent and Marine Poirier. “The Yemeni Congregation for Reform (al-Islâh): The Difficult Process of Building a Project for Change.” In Returning to Political Parties?: Partisan Logic and Political Transformations in the Arab World. Edited by Myriam Catusse and Karam Karam, 61-99. Beirut: Presses de l'Ifpo & Lebanese Center for Policy Studies, 2010.

Weir, Shelagh. A Tribal Order: Politics and Law in the Mountains of Yemen. Austin: University of Texas Press, 2007.