The Middle East Institute’s Oman Library holds 16 issues of the Arabic-language Syrian journal of theatrical studies al-Ḥayāh al-Masraḥīyah (Theater Life) dated between 1977 and 1988 and published by the Syrian General Organization of Books within the Syrian Arab Republic’s Ministry of Culture and National Guidance in Damascus. al-Ḥayāh al-Masraḥīyah served as an important record of theatrical criticism and developments in Syria and the broader Arab world. At its helm was the acclaimed Syrian playwright Sa‘dallah Wannous, who founded the journal and acted as editor-in-chief from its inception in 1977. Some of Wannous’s most well-known works include Hanthala's Journey from Slumber to Consciousness (1978), The Rape (1989), and Rituals of Signs and Transformations (1994). Three of Wannous’s plays can be read in English translation in other volumes held by the Oman Library: The Glass Café (1965) and The King’s Elephant (1969) in Short Arabic Plays: An Anthology edited by Salma Khadra Jayyusi (New York: Interlink Books, 2003); and The King is the King (1977) in Modern Arabic Drama: An Anthology, edited by Salma Khadra Jayyusi and Roger Allen (Bloomington: Indiana University Press, 1995).

Long heralded as a preeminent playwright in the Arab world, it is only in more recent years that interest in Wannous’s work has swept across the English-speaking world. As a literary figure known for his politically-imbued works, particularly after the Arab defeat in the 1967 War with Israel, Wannous’s works have gained a renewed vitality with the Arab uprisings that began in December 2010. While critics readily associate Wannous’s work with philosophical movements such as European existentialism, others note that continental philosophers have tended to see “the self” as the focal point of existentialist thought; Wannous’ work, in contrast, focuses on the bonds and broader social conditions that link people together.2

The politicization of theater, a project central to Wannous’s oeuvre, became particularly challenging following two events that upended the sociopolitical landscape, according to researcher Sonja Mejcher-Atassi: “Ḥāfiẓ al-Asad’s coup d’état in the so-called Corrective Movement (al-ḥarakah al-taṣḥīḥiyyah) of 1970 and the 1973 Arab-Israeli War, which helped the al-Asad regime to consolidate its power.”3 Within the context of a Baʿthist Syria rife with censorship, Wannous often relied on symbols, allegories, and historical references when including commentary on contemporary politics in his work. After the 1978 Camp David Accords and subsequent Egyptian-Israeli Peace Treaty, both devastating events for Wannous on a personal level,  some critics have suggested that his work turned away from his more didactic political themes and towards a more introspective disposition.4 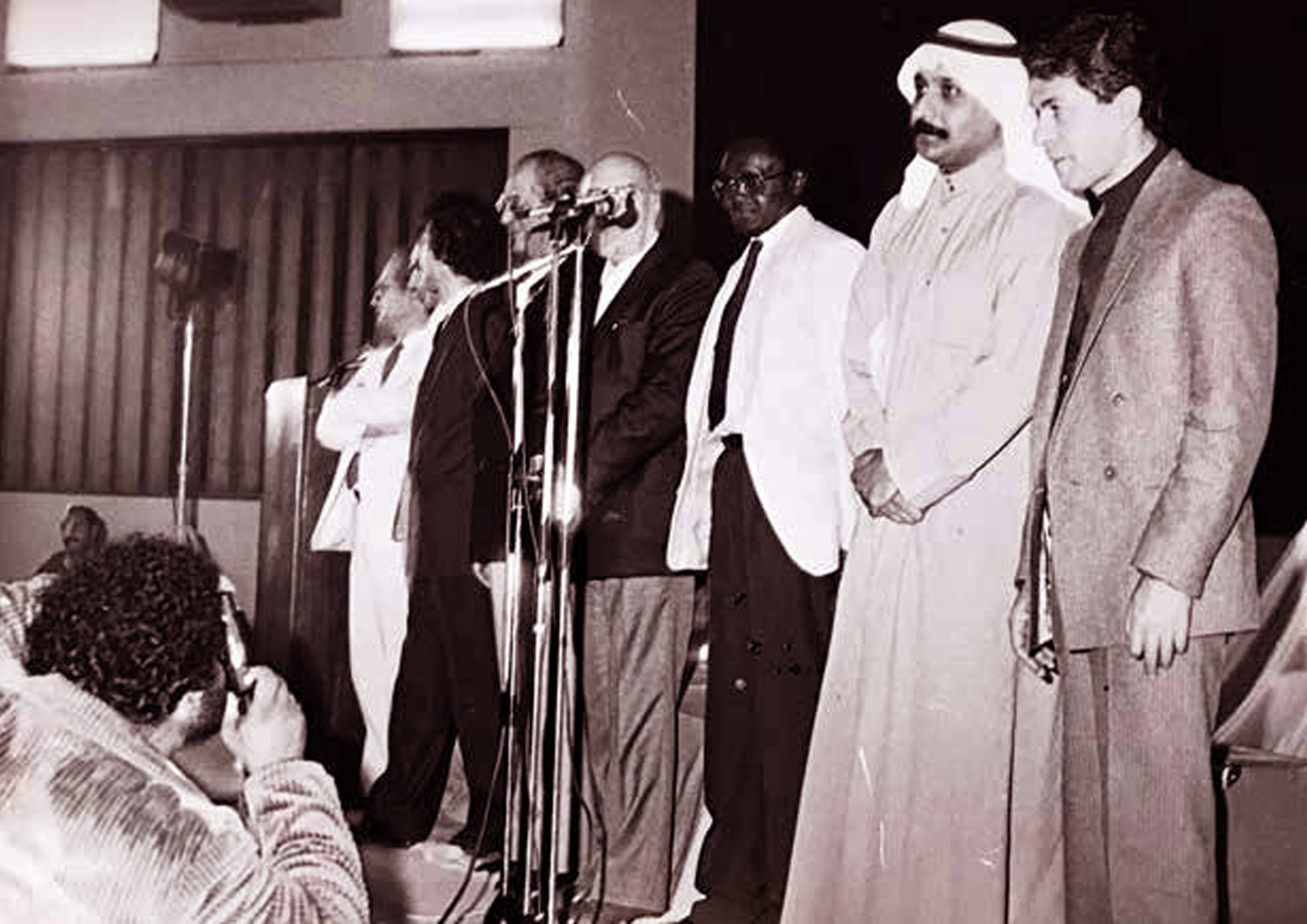 Fig.2 - Sa'dallah Wannous (first from right) with playwrights from across the Arab world at a festival of Arab theater. (Source: Al-Jadid)

Lebanese novelist Elias Khoury has also highlighted the language in Wannous’s work for its ability to make literary Arabic more accessible and reflective of everyday life.5 Bringing these elements of Wannous’s work into English has been a pursuit of many scholars since his death in 1997. Scholars Robert Myers and Nada Saab alongside other accomplished translators and academics have published extensively on and rendered into English Wannous’s work in recent years in the publications Four Plays from Syria: Sa‘dallah Wannous edited by Marvin Carlson and Safi Mahfouz (New York: Martin E. Segal Theatre Centre, 2014), Modern and Contemporary Political Theater from the Levant (Leiden: Brill, 2018), Sentence to Hope: A Sa‘dallah Wannous Reader (New Haven: Yale University Press, 2019), and The Theatre of Sa‘dallah Wannous: A Critical Study of the Syrian Playwright and Public Intellectual edited by Sonja Mejcher-Atassi and Robert Myers (Cambridge: Cambridge University Press, 2021).

Like these newer analyses of the work of Sa‘dallah Wannous, renewed engagement with an important primary source such as al-Ḥayāh al-Masraḥīyah could yield new insights into Wannous’s relationship with Baʿthist institutions, shifts in the themes foregrounded in his dramas over time, contemporary debates surrounding existentialism in the Arab world, the place of committed literature (al-adab al-multazim) in Arab and global thought in the Cold War era, and more. 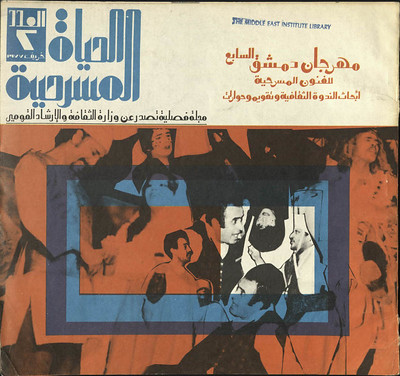 These issues of the journal also offer a window into the world of Arab literary history, criticism, and translation beyond Wannous’s writing. The opening essay of al-Ḥayāh al-Masraḥīyah’s first issue is a speculative investigation on the future of Arabic theater written by Egyptian critic ʻAlī al-Rāʻī. The second issue features an essay entitled “Reflections on / Contradictions in Arab Theater” by Syrian poet Adūnīs, who figured prominently in the establishment of the well-known journal Majallat Shiʿr (Poetry Magazine) two decades earlier. Elsewhere, one gets a sense of the philosophical and artistic influences of Wannous and his colleagues on the editorial staff of the journal. The journal frequently features translations of criticism from French thinkers like Jean-Paul Sartre and Roland Barthes, as well as translated works of theater from the likes of Bertolt Brecht–a key influence for Wannous in particular–and Soviet dramatists.

al-Ḥayāh al-Masraḥīyah brought together a diverse array of viewpoints on the future of theater, but their contributors were united in their belief inthe power of the theatrical form to shape social and political discourse. In line with Wannous’s belief that theater as a medium could serve as a starting point for engaging in dialogue, al-Ḥayāh al-Masraḥīyah became an important forum for debates around the future of the theatrical arts in the Arab world. Most of all Wannous’s work reminds us that, in spite of the temptation of cynicism, it is incumbent upon us all to forge a politics based on a sort of radical hope. In his famous 1996 address on World Theatre Day, during which time he was battling an aggressive cancer, he repeated the maxim, “Our lot is to hope, and what happens today cannot be the end of time.”6 From the early days of al-Ḥayāh al-Masraḥīyah until his death, this message remained a throughline.

Wannous’s own private library has been held by the American University of Beirut since 2015 where researchers are examining the stories his collection might tell us and the connections it might illuminate.7 This Digital Exhibitions series from the Oman Library hopes to do the same for the Middle East Institute’s own collection. The Oman Library is one of only a handful of libraries in North America with this rich of a collection of al-Ḥayāh al-Masraḥīyah issues. It is one of only two institutions in Washington, D.C. to hold issues of the journal. The journal is not yet available in digitized form at any academic library or research institution in the United States. Members of the public and friends of the Middle East Institute are welcome to come consult these materials by appointment Monday - Friday 10:00 am to 5:00 pm. Members of the Middle East Institute may request digitized scans of these materials to be delivered electronically as well. University students and faculty in the DC-area may contact the Library directly at library@mei.edu for more information about these works.

Kassab, Elizabeth Suzanne. “Summoning the Spirit of Enlightenment: On the Nahda Revival in Qadaya wa-shahadat” in Arabic Thought against the Authoritarian Age: Towards an Intellectual History of the Present. Edited by Jens Hanssen and Max Weiss, 311-335. Cambridge: Cambridge University Press, 2018.

The Theatre of Sa‘dallah Wannous: A Critical Study of the Syrian Playwright and Public Intellectual. Edited by Sonja Mejcher-Atassi and Robert Myers. Cambridge: Cambridge University Press, 2021.